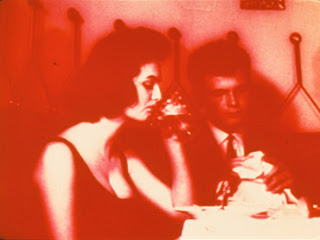 Thinking about how we use our own bodies to develop an understanding of the world reminded me of meeting Austrian film-maker Peter Kubelka. He gave a fantastic talk/performance about how he thought about film as part of the Evolution Festival in 2007. He started to talk about his film making by walking about trying to measure out lengths of film which he had wrapped around his arms. He would link seconds of running time to how far he could extend the film by using his hands and feet. Holding the film down with his toes he would stretch out, so that his body was contained in the film loop. He would then lay the film across the floor and walk along it, each stride being linked to a time and rhythm that would be of course part of the film run time as it would be when eventually put through a projector. In order to get his audience to remember to digest the information he was delivering he gave out donuts, which not only reminded him of a sun symbol (therefore light) but the looping of film and the cosmic circularity of all things, as well as the fact that once information is digested it is absorbed and unwanted elements become waste.
That soft shape we get when we round edges off has set up another embodied train of thought. Why is it that so many people hate Comic Sans typeface? Is it just too 'babyish'? See link below: Death to this typeface.
Posted by Garry Barker at 07:28