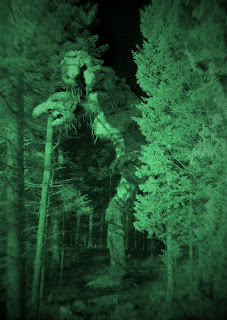 One of the things all of you as students will be asked to do is review things you have seen. So perhaps I should at least have a go myself. I went to see André Øvredal’s Troll Hunter at the Hyde Park over the weekend. So some thoughts.

I was a bit worried during the opening 10 minutes. The cinema vérité style has been used so much since The Blair Witch Project and Cloverfield and for me it had reached its most comedic effect in ‘Never Been Thawed’ and ‘A Day without a Mexican’. It’s almost impossible to go back to those days when a hand held camera kept running seemed to heighten the reality of horror, hand held cameras now just seem to increase my awareness of sea sickness. They are just another convention and when used had better be used thoughtfully and with purpose. However after a while I started to think that the technique itself was been used as a joke and this was done to reflect the content, which itself was another joke. Shaky-camera, green night-vision, cameras still running after being dropped, the shattered lens shots, long-lost footage; all played off against the monster in the dark, government conspiracy theories, young people trapped in a horror situation that they can’t seem to escape. But then the details start adding up. A shot of miniature trolls as tourist souvenirs, connected with something, I realised this film has a history that goes all the way back to the troll doll. My sister had one in about 1965, The Trollies Radio Show, had trolls singing ‘Wooly Bully and Manfred Man’s ‘Do Wah Diddy’, the Trolls are well known within the world of Kitsch culture and had a track record of being marketed by the Norwegian tourist board. It was their hair I couldn’t stand, or was it my sister’s preoccupation with platting it? Whatever, Trolls are not just part of nursery time culture any more, but even I must admit the ‘Three Billy Goat’s Gruff’ used to scare the hell out of me and the scene of the sheep and the Troll coming out from under the bridge brought it all back.
I must get back to the tourist thing. Part of the format was clearly a reference to tourist board films, like those we get celebrating Scotland’s wild beauty and rough wilderness. I’m sure Norwegians are inundated with these and film-makers probably cut their teeth on them, shot after shot of fjords, mountains and forests do start to wear you down after a while, but again, I was starting to get the humour; a particular type of Nordic humour, but it was definitely funny in a not laugh out loud sort of way. 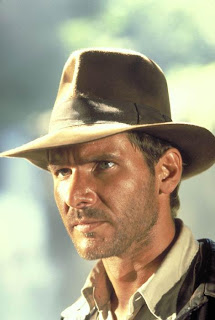 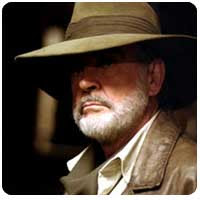 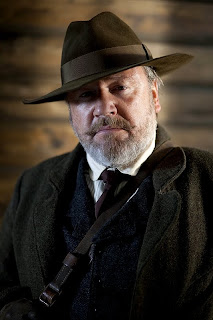 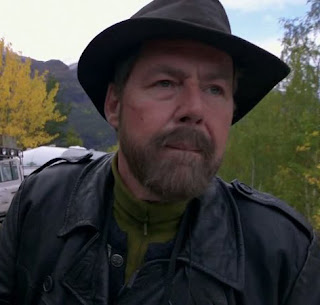 Jespersen's performance as the troll hunter is essential to the film's success. He is a well known comedian in Norway, so it’s a bit like Jack Dee playing Indiana Jones as far as Norwegians are concerned. That straight faced acting method he uses is part of his comedy ‘act’ and we are meant to see the link between the hero’s costume, (bush hat, boots, belts etc) and the tight lipped, manly man’s man of action movies. See Sean Connery’s Allan Quartermain in ‘The League of Victorian Gentlemen’ or even Ray Winston in ‘Tracker’. Do the clothes make the man? In this instance they at least make the connection.
Jesperson’s performance just about saved the film from the exhausted and overused mockumentary format, and allowed the film to play off subtle humor with physical tension. That tension was often due to footage that had been a product of ‘night vision’ filming, which had then had grain added in post-production to make it even more realistic night vision footage. That peculiar green and quality of otherworldliness is just right if you are going to construct a world within which horrors can grow and suddenly arrive out of the dark. Perhaps this is why so many early black and white films still affect us. Old tricks, like never show the audience the monster, but show tree movement, shadows, make us feel and hear vibrations from heavy footfalls, were all used well. The moving trees in Kurosowa’s ‘Throne of Blood’ still being the best tree image; the forest in Disney’s Snow White is out of the same visual history, which goes all the way back to Altdolfer’s ‘St. George in the Forest’ or the forest of Fangorn in Tolkien’s ‘Lord of the Rings’. In fact when we see the Troll, it’s as always a bit of a disappointment, but in this case it’s OK, because it’s a joke and the troll is easy meat for the hunter. Just turn the light on and the troll is turned to stone. It would have been a good moment to suddenly turn the light on in the cinema at that point and watch the pale audience reaction. Somewhere the light as tool to remove darkness myth is still more resonant in the movies. We still gather together for comfort in the dark, listening to stories around that single point of illumination. In this case it being the Hyde Park Cinema, people had twigged the joke early and were chuckling along as the film went through its various acknowledgements to other cultures.
So how was it? Part horror movie, part social satire, part Norwegian travel documentary, part monster movie, part vehicle for one of Norwegian’s best known comics, it was a film that I found slightly confusing as how to react. Mildly funny, very knowing, too long and at times just poor, it did ask some questions and keep me in my seat, so it can’t be bad, or can it?
Comments welcomed.
Posted by Garry Barker at 08:59