Phenomenology as an approach to film and game theory. 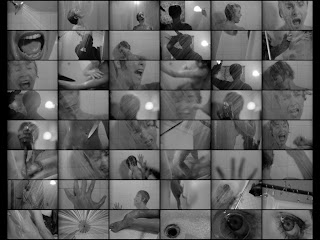 Above: A collage of images from the shower scene in Psycho

Many writers on film and game concentrate on the intellectual aspects of theory. However my experience of watching film or playing games is much more physical. I start with a feeling and this usually resides in my bodily reactions. I’m not the only one who feels this.

Vivian Sobchack states in : Carnal Thoughts – Embodiment and Moving Image Culture.
“Nearly every time I read a movie review in a newspaper or popular magazine, I am struck by the gap that exists between our actual experience of the cinema and the theory that we academic film scholars construct to explain it – or perhaps, more aptly, to explain it away.” (2004: p.52)

This gap between theory and experience is sometimes where trying to write about film and game becomes unstuck. What we are writing does not seem to match up with experience. I want a way of writing that reflects how film and game experiences move me. In particular at that moment when I want to cry or laugh out loud or get that hand clenching tension as I wait for the monster to reveal itself or find out if the hero survives.
Phenomenology is centred on perception and how our senses make meaning. It is also called embodied thinking. Therefore when trying to analyse responses to a film or game it’s useful to focus on how we are perceiving the world normally and how a construct like a film or game forces us to perceive differently.
Deleuze and Guattari state that the three great domains of human creation are art, philosophy and science. These three different modes of expression are they suggest; perceptual, conceptual and functional. In particular they argue, art relies on the creation of sensuous aggregates. (Rodowick in Furstenau, 2010, p. 31)
The term ‘sensuous aggregate’ is one taken from Husserl who used it to describe a ‘unified intuition’ (Farber, 2006) and is a term used to describe the various feelings and bodily knowledge that come to us through pre-cognitive thought. This ‘sensuous aggregate’ is something that I might also call a ‘feeling tone’ when describing an experience.
These feelings must come from my bodily experience of the real world. For instance at this time of the year when I leave work it’s dark. It’s also dark when I get up. This absence of light definitely makes me feel slightly depressed. This isn’t just my feeling, scientists have now linked depression to an absence of light and seasonal affective disorder (SAD) is a recognised medical condition. If I catch movement out of the corner of my eye I’m alerted to something, I therefore switch my attention on and if I can’t spot anything when I do this I become nervous. I’m aware of something that possibly exists but I’m not sure what it is. In a dangerous situation this of course would lead to real fear. In film or game these experiences can be triggered by the way a film is shot and edited or a game constructed and lighting levels decided upon.
The theoretical concept, ‘the abject’ is according to Kristeva (1982) situated outside our normal symbolic order, therefore being forced to face it is a traumatic experience. The usual examples used for this are being faced with a corpse, death, excrement and rot etc. However it could also be argued that these are simply learned responses to colour and textures that we associate with disease, food rotting, meat going off etc. and are bodily warnings to stay away from potentially dangerous situations. In art, in particular in film and game we can be made to experience these feelings through colour selection, (for instance food may be photographed when lit under a blue light) or texture (slimed surfaces etc) purposely developed to create revulsion.
In Psycho the scene when Janet Leigh is having a shower is a classic piece of phenomenological editing. We are drawn in to believe she is relaxing and oblivious to the world whilst she showers, this being something everyone of us can bodily feel. We all escape momentarily from the world in a shower’s warm jet of water. Then suddenly a shadow appears outside the curtain. That mind- shrieking violin music starts up and then the knife plunges into her naked back again, and again. The physicality of each blow is felt by us with even more force because we have been drawn into that feeling of being warm and naked in the shower. We have unconsciously achieved a bodily empathy with Janet and therefore feel the blows that much more deeply. The ripping of the shower curtain as she falls, and the cut to the blood swirling down the drain all add to the sense of bodily disruption because of the rapidly changing camera angles. We associate these changes in viewpoint with moments we have experienced such as falls and accidents, when we are violently forced to see the world from low and difficult angles. Hitchcock knows how to get us to engage with his film, in particular he is controlling our ‘sensuous aggregate’ by building physical associations with characters and situations and thus subjecting our overall ‘feeling tone’ to a complete filmic makeover. Bernard Hermann's eerie score further reinforces the development of the ‘feeling tone’ of the film. His high-pitched violins encapsulate the whole feeling of the film. Sounds of that tone and pitch being associated with the scraping of metal on metal or that awful screech you get when animals are being killed, again associations that develop through real life experience.
Technically nearly the whole film was shot with 50 mm lenses on 35 mm cameras. This closely mimics normal human vision, which deeply linked the audience’s perceptions of the cinematic world to their own real life experiences.
I could go on but the point of this post was to highlight one of the areas of communication theory and demonstrate how it could be used to look at film or game. I’ve also cited references used, so that those of you starting to develop essay ideas can get used to how citations should appear in a text.

Farber, M (2006) The foundation of phenomenology: Edmund Husserl and the quest for a rigorous science of philosophy London: AldineTransaction

Email ThisBlogThis!Share to TwitterShare to FacebookShare to Pinterest
Labels: film