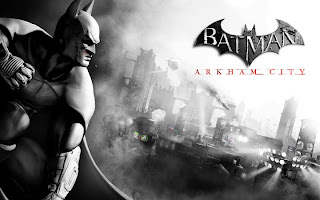 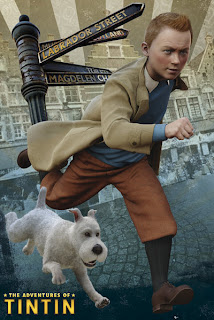 There is a new Batman Game 'Arkham City' being launched this week, as well as the new Tintin film coming out. This of course had me thinking about their roles as transmedia characters and why these comic book figures have survived for so long and still seem to have relevance.
I looked at the on-line promotional materials for the new Batman game and interestingly there was no gameplay, it was simply a series of images that were designed to reinforce what we already know of the character and the environment of Gotham city. The opening sound was of course the theme tune to the Batman movies, (not of course the "Da Da Da Da Da Da Da Da BATMAN!" one), but the Danny Elfman written theme from the 1989 Tim Burton film. http://www.hark.com/clips/rttkwddvls-batman-theme-song. Burton established the dark gritty feel of Gotham using both Frank Miller’s reinvention of the character and a nod to Fritz Lang’s Metropolis for the setting. The game keeps this dark lighting and in the clip there were further references to the settings of early James Whale Frankenstein movies, in particular the lightning flashes and operating tables.
Rocksteady's David Hego has explained that Arkham City's use of light and shadow and warm and cool lighting are used to direct a player's attention within the environment. He has had much to say about the stylised realism used to design the characters. He called the exaggerated features and realistic textures of the character models, especially that of the Joker, a kind of hyperrealism. He feels that hyperrealism also circumvents the problematic issue of the uncanny valley. (See my post of Monday, 29 November 2010, as well as http://www.guardian.co.uk/film/2011/oct/27/tintin-uncanny-valley-computer-graphics?INTCMP=SRCH a Guardian article on the problems with the new Tintin film, which I shall get back to). As Hego states, "One of the big advantages of the stylised realism was we were jumping across the uncanny valley… By making [the characters] so stylised, you can forget about uncanny valley because you accept that it's not real."
In some ways the game is a celebration of the Caped Crusader’s expansive mythology.
The main narrative of Arkham is a story based on the internal corruption of Gotham City which is portrayed as a type of disease, the Joker is slowly dying, internally corroded and we get the sense that everything is diseased and old. These are themes that Paul Dini (a long time Batman writer) has used several times before and of course Grant Morrison has been scripting Batman recently (Batman Incorporated) and has imported his unique take on conspiracy theories and double layering of realities. All of this seems perfectly suited to the current climate of economic depression and corruption within the global economy and banking systems.
It’s interesting to unpick why Batman (created in 1939) should still be relevant and Tintin, a character created in 1929 should be not quite so pertinent to life now. Both though have resilience as transmedia characters that has ensured that they are returned to over and over again.
The key to Batman’s cultural longevity is that perhaps the “devil has all the best tunes” and taps into deep archetypes, and holds together in one character several key concepts and archetypal psychological models that enable us to on the one hand have empathy with the roles he plays out and on the other accept his almost god like powers to overcome evil.
Perhaps it’s the 19th century where we need to look for the roots of these fictional beings. Both Batman and Tintin are detectives, they hark back to the classic model of Conan Doyle’s Sherlock Holmes who first appeared in 1887, but Tintin is more in the Alan Quatermain mould, a character developed by H. Rider Haggard in 1885, (Indiana Jones being a more recent reinvention of this) he is an adventurer inconceivable outside of a colonial or post-colonial setting. 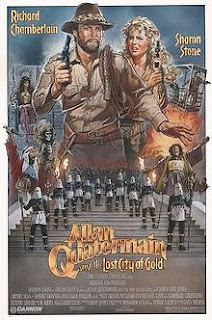 Batman can be traced back to the 1886 novel by Stevenson, ‘Doctor Jekyll and Mr Hyde’ and Bram Stocker’s ‘Dracula’ of 1897. 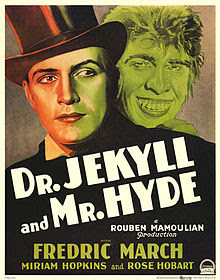 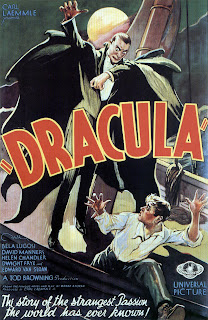 These images are specters that haunt an evil society. The late 19th century was a time of heavy industrialization and it saw the rise of global capital, mass population transfer to city living, the evils of slums, downtrodden populations. In 1848 Marx had published the Communist manifesto, a manifesto that starts, “A spectre is haunting Europe” this spectre was a response to the evils of a capitalism that was then as now rampant and people’s fears were echoed in the shaping of new archetypes that could combat the dark forces they were confronted with. Science being on the one hand a potential savior, but on the other a means of destruction, this duality reflected in Mr Hyde’s horrific nature as the reverse of the scientifically minded Doctor Jekyll. The ability of scientific thinking to solve problems was a clear vindication of the Enlightenment project, (a project that was to be questioned by the Romantic movement) and paradoxically once again, just as science seemed to be the only real answer to the world’s problems a new dark territory opened out to us through the work of Freud and an awareness that our unconscious was shaping our supposedly ‘logical’ responses to life. This duality, the potential of science to solve problems, (the detective) and the awareness of the power of the unconscious (the vampire, the bat in the night, Mr Hyde) is what makes Batman so interesting. Perhaps there is not enough contradiction in Tintin’s make up to ensure his relevance to our lives under 21st century late Capitalism. Tintin is essentially only knowable as a comic book figure. His complexity lies in the relationship between Hergé's ‘ligne claire’ drawing style and the printed text. Batman on the other hand has had numerous writers and artists depict the character, Bob Kane as an artist and Bill Finger as a writer, never fixed his image beyond the initial concept which has morphed with the times. Tintin would not be Tintin without Hergé, hence the problems with the new Tintin film, but Batman is open to constant re-interpretation.
Both characters are tied to childhood, but in different ways. Batman will forever act out the night of witnessing the death of his parents, Tintin will never grow up. It’s only when we are happy supported children that we believe that we don’t need parents, because their support is such that they seem as natural as water is for fish to swim in, we can’t imagine the world without them. As we mature, there will be always a point of parental loss and we then have to make our own decisions about life and face the tragedy of our own drama. Perhaps this is why Batman’s early loss resonates with audiences as they get older and Tintin’s angst free life is more something for the child in us. Tintin’s fictional life is one that is essentially comedic, the action may be tense but it never descends into the dark, his soul is spotless, but Batman’s is dark and torn around the edges and is tragic.
Both characters have animal shamanistic elements. Tintin and Snowy come as a unit. An inseparable combination reminiscent of Philip Pullman’s dæmons. Batman is of course a ‘manbat’, he dresses as a shaman would, clothed in an animal costume designed to alter his persona and strike fear on his enemies. His bat animus (Jungian term) being a primary anthropomorphic archetype of the unconscious mind. In one comic thread Batman first learned of the powers of bats from ancient North American indian folklore, so it is not too far-fetched to assume that his writers have been very aware of the shamanistic links and play with them, Hergé of course never reflects on this relationship and Snowy is simply a very knowing dog.
Perhaps above all the fact that Batman is normal, (well as normal as an Olympic athlete is), means that we can see ourselves being able to do the things he does. This is often the flaw in Superman, who is very hard to relate to and therefore to defuse this films of Superman often have a comic element. Superman’s origins on a farm, don’t have the same relevance to us as an urban childhood. However I’m now drifting off the point so perhaps I better stop. It would be interesting to hear readers own views of these two releases. 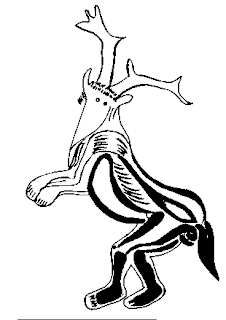 The above image of a shaman is from Les Troyes Feres cave complex and is over 14,000 years old.
Posted by Garry Barker at 04:46