Is film an art form? Part 2 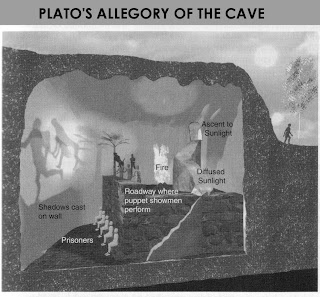 The last post argued that stained glass is an art form; however it can come in very different formats. A Medieval cathedral round window, a narrow niche in a college foyer, a lamp shade etc. I think there has often been slippage as to what is considered an art form and what is a format. I would argue that a symphony is a musical format, so is a 3 minute pop record, someone singing in the bath and a folk song. Non of them necessarily are aesthetically pleasing unless they “provide a perceptual experience of pleasure, meaning, or satisfaction”. My problem now is the word ‘pleasure’. Is giving pleasure enough? We tend to associate ‘pleasure’ with ‘entertainment’ and disassociate the term from ‘meaning’. Perhaps this is a mistake. Much art is ‘difficult’; hard to understand, jarring, designed to shock etc. Modernism (as in Dada, Surrealism etc.) is often ‘transgressive’, which itself is defined as, “of or relating to fiction, cinematography, or art in which orthodox cultural, moral, and artistic boundaries are challenged by the representation of unconventional behaviour and the use of experimental forms”. So the old chestnut, “But that’s not art!” is perhaps not as simple to get round as we think it is. If an art form is “a conventionally established form of artistic composition”, if this convention is broken, is this not a way of therefore establishing the fact that what is there is not art? Again though there is the problem of ‘convention’. Who establishes this and why? Conventions have often been overthrown because they were out of date or put in place by power structures that have now been deposed. The avant-garde as a concept presumes that artists should operate at the boundaries of convention. Is this something to do with how a society establishes its ‘moral’ fabric? What is it right and proper for me to do as a member of society?
It might be of interest at this point to go back in time somewhat. Epicurus (341–270 B.C.) believed that knowledge is derived from the senses. The pursuit of pleasure and the avoidance of pain, were therefore at the centre of life’s decision making. He tried to demonstrate the differences between natural desires, (need for food etc) and artificial ones (need to pander to vanity, have more riches etc). He was looking to develop a philosophy that led to contentment of mind. He would therefore suggest that transgressive art forms were to be avoided as their assimilation could lead to a disturbance of mind. Inner peace or ‘ataraxia’ is what we should be aiming for. Therefore forms of art that lead to contemplation are what he would advise we should develop. All this however seems in opposition to Aristotle's ethical and social activism.
In Aristotle's Nichomachean Ethics Book VI he states: “What affirmation and negation are in thinking, pursuit and avoidance are in desire; so that since moral virtue is a state of character concerned with choice, and choice is deliberate desire, therefore both the reasoning must be true and the desire right, if the choice is to be good, and the latter must pursue just what the former asserts.”
In order therefore to make choices “reasoning must be true and the desire right.” So it isn’t enough to set out a clear reasoned argument for the establishment of an art form, the emotional need for art must also be given a voice.
My feeling is that emotional needs are linked to deep psychological drives and that these have been wired into us over thousands of years of evolution. It could be argued that human psychological traits are evolved adaptations to solve recurrent problems that have faced humankind in the various environments we have found ourselves living within. So why do we get pleasure or satisfaction in sitting together in the dark watching an illuminated screen of moving images? 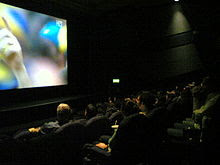 
We have archeological evidence of human beings doing similar things over 30,000 years ago. In 1976 Richard Dawkins published ‘The Selfish Gene’, in this text he proposed that there was a way to look at culture from an evolutionary standpoint. He came up with the term ‘meme’ his word for a unit of culture that was supposed to be rather like a ‘gene’, something that is carried by a mind and that can be reproduced from mind to mind. In the same way that a gene is subject to the ‘survival of the fittest’ evolutionary test, a meme will survive if it is useful to us and our collective survival.
There is a wonderful book by David Lewis-Williams called ‘The Mind in the Cave: Consciousness and the Origins of Art’. He proposes a scenario where early humans collected together in caves to develop a particular set of rituals which were essential to collective survival. The shape and form of these rituals is I would argue still apparent within our present cultural products and activities. Williams describes a scene from 30,000 years ago, where people enter through a narrow passage that opens out into a cavern. The darkness is lit by flickering lights and images appear to almost move as the light flickers across the surface of undulating stone. Sounds of drumming fill the space and chants are sung and narratives told as social rituals are enacted. I’m sure certain modern forms of entertainment reflect these conditions quite closely. On the other hand, caves, in particular those structured in similar ways to the Rock Womb at Nenkovo, are clearly womb-like structures, the significance of which is inescapable. 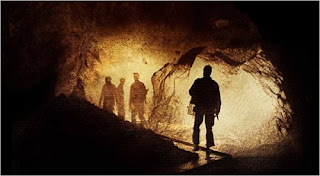 What really struck home with me however was Lewis-Williams’ description of the wall of the cave as a membrane. A surface that was understood as a barrier between the world of the living and the world of the spirit. It is an awareness of this divide and a need to come to terms with it that I feel lies at the core of what ‘art’, ‘religion’ , science’ and all our other forms of collective coming to terms with what’s out there are all about.

The psycho-analyst Lacan has a term called ‘the big other’. This is something that is so radically different to us that it goes beyond the imaginary. This term is usually linked to his understanding of constructions such as the law. However if we think of death as a passageway between what has life or ‘élan vital’ as Bergson would put it and what is inanimate or dead, the big issue is what is it that changes? At one moment a human being is alive, moves and has soul, at another there becomes no difference between a body and a stone, both exhibit complete inertia and are lifeless. This is a fundamental thing that we as conscious beings have to come to terms with. Perhaps all our ‘art’ forms are in one way or another simply trying to help us understand what it is to accept death as part of life’s experience. Without the development of culture our lives would be meaningless. In this sense culture has an intimate relationship with the development of religion. My experience of religious chanting or whirling dancing being at times not far away from my experiences in raves; my experiences in art galleries has at times reminded me of visiting a cathedral.

So is film an art form? Well yes and a powerful one. It brings together light, movement, sound and narrative in a collective environment and its images and stories attempt to make sense of the world. How many times as we leave a film with a partner do we end up discussing, “what was that all about?” What it was about was a meditation on the human condition. Whether or not it was a useful one, a deep one or a superficial one is another issue.
Posted by Garry Barker at 05:18

Email ThisBlogThis!Share to TwitterShare to FacebookShare to Pinterest
Labels: film, mind in the cave, psychology