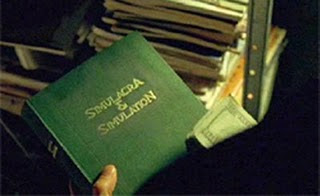 Image above taken from the Matrix.

There has as always been a lot of interest in hyper-reality as an area around which to develop level 5 essays, however it is not enough just to celebrate Baudrillard for his perceptive analysis of the media soaked conditions of our time, he needs to be put into some sort of perspective. On the one hand of course it is possible to compare and contrast his views with those of Marshall McLuhan but perhaps you could even go back to one of McLuhan’s key influences F. R. Leavis, a man who basically set out the framework for what in colleges and universities we now call critical studies. In 1930 Leavis published ‘Mass Civilisation and Minority Culture’ this was a book that would set out how to critically analyse contemporary cultural products. He was teaching in an English Literature department so was essentially writing about the paucity of critical thinking around writing but his views would influence a much wider spectrum of thinking. He reconnected critical thinking in relation to culture with political awareness and in doing so set out a framework of relationships that both Baudrilland and McLuhan would benefit from. He wrote about culture as it exists within the ‘modern industrial world of mass production’ which treated men as ‘a factor necessary to production” in a system where power and capital had become one. He stated, “Men are now incapacitated by their work, which makes leisure necessary as it was not before.” People are now “using their leisure for ‘humane’ recreation, that is, in pursuits that make them feel self fulfilled and make life significant, dignified and satisfying.” He pointed to newspapers, the cinema, the gramophone and radio as being areas that people were turning to as technologies within which they could immerse themselves in order to give their life meaning. McLuhan took these ideas further as he recognised that these technologies were changing the way we think and Baudrillard extends the idea further as he posits a world where the technologies of escapism now drive our view of reality. If you are going to write about hyper-reality perhaps you need to consider it as a gradually developing idea and introduce a historical context.
The central problem with Baudrillard however, is that the proliferation of simulacra gives us nothing to grasp, no reality with which to forge weapons that can be used to fight back against the prevailing conditions of capitalism and its accompanying evil consumerism. However Deleuze and Guattari in ‘A Thousand Plateaus’ find a way to think about levels of representation rather than simulations. Thus a double becoming looks towards the growth of potential. By combining ideas that are embedded within the representations that surround us, we can start to create anchor points. Then, Deleuze and Guattari’s ideas of rhizomatic connections can be envisioned as a sort of flexible underlying grid, each intellectual move taking up another position on the grid that had not previously been used. These then become the lever points for new fables and stories created from unforeseen amalgamations of potential. (This could be seen as a type of philosophical big bang). From these new positions of leverage you can then fight back against Capitalism’s simulacra and overturn simulation with representation. Deleuze and Guattari state that this resistance is a collective project and locally the rise of new cooperatives such as the Leeds Creative Time-bank could be the type of organization from within which these changes might happen. Eventually these working bodies of self-supporting groups of connected individuals may inject themselves into the body of Capitalism as antibodies designed to eliminate and protect us against false consciousness.
What Deleuze and Guattari offer is a theoretical standpoint capable of re-reading Baudrillard's hapless world of illusion as a type of metamorphosis that offers up a range of leverage points for change. Set against the cynicism of postmodern ethics a new moral landscape emerges of hope and new possibilities. As artists and designers we can combine our talents and seek to re-touch the real through making and constructing our own narratives of representation. In the world of the Matrix it is interesting to see that the hollow book that represents simulacra and simulacrum is handmade with a green cloth binding with its title in embossed type. The prop no doubt made by an expert craftsperson. This craft is of course linked to the crafts of camera work, editing, special effects creation and all the other skills required by the community of film-makers. Debates in seminars have suggested to me that our ethical and moral world is one that needs rebuilding and perhaps one avenue we can take as artists and designers is to do this collectively alongside the collective sharing of our individual crafts. Is this perhaps a move towards a new type of guild system or the establishment of co-operatives? A co-operative is defined as "an autonomous association of persons united voluntarily to meet their common economic, social, and cultural needs and aspirations through jointly owned and democratically controlled enterprise". In a world where power is often invested in large corporarte organisations, it may be worth thinking about alternative models within which you can set up ways of working that enable you to achieve a lifestyle that is as Leavis put it, "self fulfilled, significant, dignified and satisfying.”
Posted by Garry Barker at 01:55