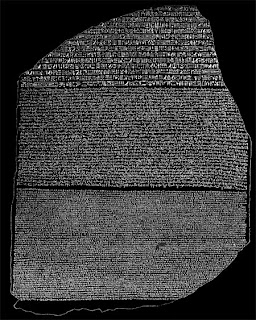 Above: The Rosetta Stone. Find a copy in Leeds museum. This is a fantastic example of solid comunication theory.

The communications lecture
Just a few thoughts.
The first is that I was very aware that not everyone had been taken through how to take notes. In the handout given out on the day it says that we recommend the Cornell note-taking method. You can download a copy from http://eleven21.com/notetaker/
Typing up your notes is a blog task and easier to do when you can still remember what was being said.
So how would these look on a blog? The first problem is that you can’t, (or I can’t divide the page into two) so unless I scan my original notes, I have to type stuff.
It might therefore look like this.

Communication Theory Lecture
Everything to be said about this is summed up in: Lasswell's maxim:
“Who says what to whom in what channel with what effect"
PowerPoint is a problem because it can make you think in bullet points, but the tutor will give us a PowerPoint presentation anyway. We have to make notes when he rambles on.
There are 7 different sorts of communication theories.
These are either Transmissional or Constitutive.
The first one we are looking at is the Cybernetic or Information Theory of Communication. This is the only Transmissional theory.
Developed during WW2 because it was understood that good communications wins wars. Finally written down by Shannon and Weaver of Bell Laboratories 1949. It is a theory obviously written by telephone engineers, their early diagram is a bad drawing of a phone conversation of people speaking and listening, with the transmitter and receiver separated by what they called ‘noise’. This is a useful system because it can be turned into equations and so you can measure if things are working or not.
Its weakness is that it is not concerned with the production of meaning itself, which is a socially mediated process.
Three levels of potential communication problems
Level 1 Technical Accuracy
Systems of encoding and decoding, Compatibility of systems/need for specialist equipment or knowledge. E.g. PC and Mac operating systems, the tutor’s lack of computer knowhow.
Level 2 Semantic
Precision of language, How much of the message can be lost without meaning being lost?, What language to use? The tutor tried Serbo-Croat out on us but he couldn’t really speak it, but the point was communication is impossible unless we all understand the language it comes in.
Level 3
Effectiveness
Does the message affect behaviour the way we want it to? What can be done if the required effect fails to happen? The tutor tries to wake some of us up, he is worried about his effectiveness as a communicator.
The cybernetic theory can be seen as a type of Systems theory, we then looked at who are we communicating to? Audiences and Social Class. We thought that class was no longer a big issue. We also thought that no matter how you break an audience down into categories in the end everyone is different.

Semiotics. This is a Constitutive theory
Blah, blah, blah you get the picture, same type of writing as above.
Then at the end, if you remember I used the whiteboard to sum up.

In Summery
Communication Theory
“Who says what to whom in what channel with what effect"
7 Traditions
2 sorts
Transmissional and Constitutive.
Transmissional
Cybernetic
Constitutive
Semiotics
Phenomenological
The next 4 will be gone through next week
Posted by Garry Barker at 05:04