At the very moment that you want to deeply emphasise with a 3D animated character you notice something is wrong, the eyes are completely lifeless or the body movement is all wrong, this is the moment of ‘The Uncanny Valley’.
The concept of the Uncanny Valley originally applied to robots, and was developed by Japanese roboticist Mashiro Mori.


Mori suggested that as robots look and behave more like humans, they became will be accepted by humans, but only up to a point. It is this tipping point that is important and when the moment is recognised it strikes deeply into the psyche as a moment of the uncanny Of course if a robot behaves just like us, with no differences we have no choice but to accept it. .
The Uncanny Valley applies to 3D characters in games and films as well, the high levels of realism making it a problem that is going to occur much more frequently.
Mori has three areas he examines as to when the Uncanny Valley effect takes place: Appearance, Movement and Behaviour. He uses the diagram below to explain how it works. 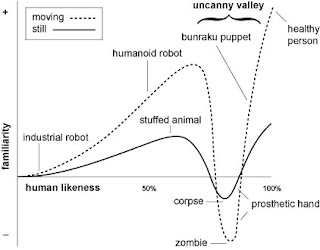 It interesting that he uses the example of Bunraku puppets. The heads of these puppets are made to represent different genders, social class and personalities and it can take up to 30 years training for a puppeteer to master the body movement and expressions. 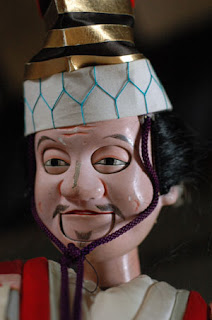 Appearance is of course essential; we read people at first glance even when we know we shouldn’t. Emotional acceptance of a character makes a big difference, especially if the character is designed to be abstracted or to look realistically human. This is why early animation can be very abstract and yet we can emphasise with the characters and understand which emotion is being represented. 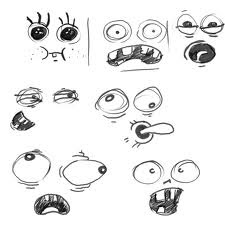 However in 2004, the game Half-Life 2 came out using the character of Alyx which had relatively realistic facial animation and, in particular, eyes that seemed to respond to emotion. 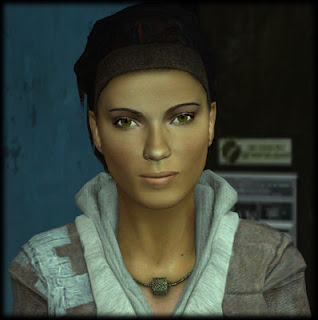 Alex from Half Life 2

In 2007, Bioware's Mass Effect attempted to model conversations more realistically by using better facial animation and expressions. However as better realism occurs the ‘uncanny valley’ effect deepens and in particular if eyes go wandering off we get a sense of dislocation.
All this relates to the phenomenology of communication and the fact that we are biologically attuned to each other’s faces.
This isn’t about better technology, artists could use facial expression in animation as far back as the 1930s, Medal of Honor soldiers are looking pretty realistic , but when you see their faces, they have no human emotion, they also don’t move in ways that make us think of human feelings. Movement being another area within which c ‘human’ experience is vital if we are to effect authentic communication.

It was Tomb Raider, (1995) that introduced the idea that realistic 3D movement was possible. It was one of the earliest examples of using motion capture graphics of real people, and applying it to real-time, interactive game animation.
Procedural animation, applying animation algorithms to models, rather than motion capture data, is now also being used, but the same limitations apply in that unless movement is spot on we read the emotional aspects of the character as disturbing or in some cases just funny.
It’s not a matter of making people move realistically. The problem is how to make human characters move in a way that doesn't leave you with the ‘uncanny valley’ vague sense of unease.
Modelling behaviour is more difficult than modelling appearance or movement.
The real problem with behaviour is our expectations of behaviour, which are of course based on our years of real world (phenomenological) experience. In built predictability for a character, ends up limiting possible options and minimizing realistic behaviour.

Recent movies such as The Curious Case of Benjamin Button, demonstrate that you can achieve high levels of authentic phenomenological communication, (The problem there being to graft an adult actor's above-the-neck performance on to the body of a smaller actor) it will be interesting to see when these levels of authentic communication reach games design. However, if we go far enough away from the humanoid, then we much more readily accept human simulations as being like us. This accounts for the success of cinema characters such as R2-D2 and WALL-E. They act like humans but they don’t look like humans. This is perhaps the area to focus on, our anthropomorphism allows us to make connections with all sorts of non human things. Tom Hanks and his volleyball Wilson in the film Castaway for instance. But you have to get it right, look at the demise of ‘Clippy’ the puppy eyed paper-clip that used to come with Microsoft Office. 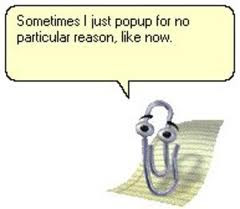 At some point the lessons of all the seven areas of communication theory will be embedded within artificially generated scenarios and at that point we just won’t know any difference between reality and simulation but occasionally when a character looks at you with that cold eye, you will shiver and realise you have just walked down the ‘uncanny valley’.
Posted by Garry Barker at 02:06