The Brothers Quay and Light Night 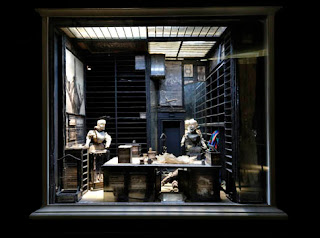 Friday night was light night in Leeds. In the basement of Leeds Town Hall was a wonderful exhibition of the work of the Brothers Quay. Any animation student, anyone thinking of using stop motion film techniques, anyone thinking about how to create sets for film and anyone who just wants to see some of the best creative imaginations working in this country should get there right now. The work is stunning.
Not only this but the Brothers Quay have been invited to come and play with the canvas that is Leeds, to create something that will alter the way we see the city, something people will remember as part of the myth of Leeds. They have proposed a large-scale work called ‘Overworlds & Underworlds’ which will place in May next year, and will explore the flow of people and water through the city. It’s hard to believe that Leeds has been brave enough to take the risk of letting their dark imaginations lose on the city. All praise whoever brokered this. 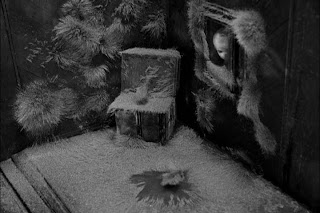 Since the late 1970s, the identical twins Stephen and Timothy Quay have made a unique contribution to stop-animation. Each Quay film is riveting, using attention to detail in sets and characterization to draw you into a strangely convincing other world. Look at their work through the lenses they embed in the side of their miniature sets, then experience how these images are animated to music and movement, evoking half-remembered dreams and long-suppressed childhood memories, fascinating and deeply unsettling in turn. Their films are often described as surreal, moody and macabre, representing a world frozen in time, full of cobwebs and dust, mirrors and strange machines. One of their best-known films, ‘Street of Crocodiles’ was adapted from a short story by Polish novelist, Bruno Schulz and selected by Terry Gilliam as one of the top 10 best animated films of all time. The set of Street of Crocodiles is on display in the ‘Dormitorium’ exhibition and when I went in they were screening some of their films too. In fact film critic Jonathan Romney included Street of Crocodiles in Sight and Sounds best 10 films of all time. They are that good. They also work on music videos. See His Name is Alive ‘We are still married’ and ‘Cant go wrong without you’. Because they work in such a classic style, I believe these videos are timeless, their own vision is so powerful, The Quay Brothers’ use of black and white and shadow is so intense that these music videos transcend the genre. Perhaps for music fans the work is too powerful and I know some find their work hard to take. However all the best art is difficult, in the case of the Brothers Quay they tap deeply into the dark side, but do it with exquisite craftsmanship, control of lighting and texture and a terrific knowledge of how to frame and pace an animation. 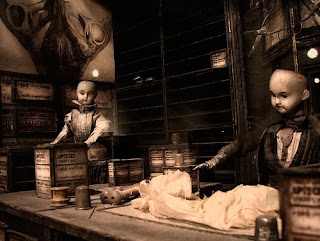 Check out their films in the collection, ‘Phantom Museums: The Short Films Of The Quay Brothers’.
Watch:
http://www.youtube.com/watch?v=L7u3lPcDh50

http://www.youtube.com/watch?v=2gIb0bTWj6w Street Of Crocodiles
Posted by Garry Barker at 09:33