Flyboy Is Alone Again This Christmas 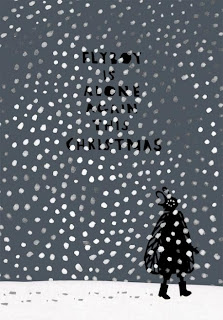 I went to see the shadow puppet opera ‘Flyboy Is Alone Again This Christmas’ on Friday night in the Howard Assembly rooms. In this show, musician and shadow puppet artist Matthew Robins tells the heart-rending story of Flyboy, a mutant half-human/half-fly, who is trying to live a normal life in a small town. Animations projected onto the big screen created using on old overhead projector, lie at the centre of a live shadow-puppet opera as Robins and his band sing and perform on stage. It was great and a wonderful example of what you can do with low technology.
Matthew works with the puppeteer Tim Spooner and a band of musicians. The show was wonderfully low-tech: Matthew played piano and sang the story, while Tim worked getting all the cut outs onto the screen for the stories or at times using layers of video projection, paper backgrounds and puppets for pieces using live video and moving superimposed cut-outs.
One story called Nosferatu and Me, where Matthew and Nosteratu mostly ride around on their bicycles and then rent a DVD in the evening, is really so simple it is hard to believe it would work live on stage with a grown up audience, but it works very well and it’s very funny. But it does get all a bit awkward when Nosferatu gets too friendly.
Matthew Robins’ songs are very narrative driven and quite often have lots of complicated scenarios. He was finding it difficult to hold people's concentration in pubs and nightclubs where he was playing his own penned music, so he added live visuals using shadow puppets. As Matthew said, “It worked and suddenly people were really focused and would watch the whole show!”
He now says he is, “writing a rock-opera concept album about mutant spiders that will hopefully be a cross between Tommy-meets-War of the Worlds-meets-Bat out of Hell-meets-The Man from God knows Where”.
Nearly all of these animations are done by cutting out black paper using a sharp scalpel. An old OHP (I bet there are lots of these still hiding in cupboards in educational institutions throughout the country) was used to get the images enlarged and up onto a screen behind the musicians. This is almost the same technology as Indonesian Shadow Puppetry and works really well if you have a simple and clear narrative to tell, with easily identifiable characters. In this case ‘flyboy’ is an easy cutout, or at least Robins makes it look as if it is. If you want to test a character for easily identifiable visual characteristics, try cutting it out of black paper and then check out its silhouette.
I realise I’m working with people who want to use digital technology to carry their ideas. But most transmedia characters have had to stand the test of recognition across several platforms and media types. The narrative strength in this case is all. The short flyboy stories are gripping and easy to follow by children as well as adults. Perhaps ‘Flyboy’ could be a future children’s favorite. He has all the ingredients. Easily identifiable visual characteristics, a storyline that mirrors those of many heroes, including travelling on long voyages and meeting strange creatures, a love story and a Christmas adventure. 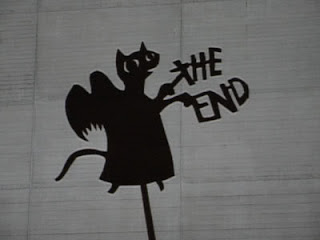