One of the issues that has come up recently in conversation with level 5 students has been why and how do game players get hooked into a game. In particular I know some of you are interested in how to design for levels. Issues such as allowing for a player to become familiar with the game world and its mechanisms during low level gameplay have been discussed in seminars and how as levels get harder the player gets sucked in as adrenaline levels rise have been hinted at in my previous post. But there are lots of other issues to consider. One of which is game immersion.
One way of describing immersion in a game or a film or other media environment is when "media contents are perceived as ‘real' in the sense that media users experience a sensation of being spatially located in the mediated environment." (Wissmath, Weibel, & Groner, 2009).

The immersive experience is a kind of relocated spatial world that the user inhabits and starts to believe in. Once they believe in this world they can start to make decisions within it that make sense as to the ‘rules’ of this world. If the world is undersea, you can swim or dive even though you are of course in reality on dry land. If an audience or player is completely immersed in their experience they have what Coleridge termed, complete ‘suspension of disbelief’. However, if the plot or storyline has inconsistencies people can easily break out of their imagined world and therefore game designers have to be very careful as to how they integrate elements from outside that world. For instance a learning tutorial can be written into a video game as part of the overall plot.
Wirth, Hartmann, et al. (2007) in their article, ‘A Process Model for the Formation of Spatial Presence Experiences’ provide a diagram of their unified theory Here it is: 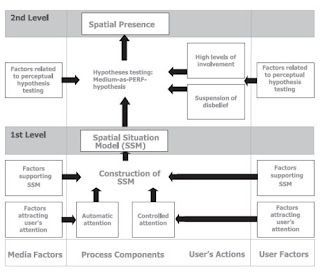 A Process Model for the Formation of Spatial Presence Experiences


Those of you that had to sit through my lecture on Communication theory might notice a similarity with some of the communication theory diagrams.
The stages in the process model show how first of all players form a representation in their mind of the world they have encountered within the game, then the next stage is to make the game world their primary point of reference or ego reference frame, which is where they suspend their disbelief.

As Jamie Madigan pointed out (2010) “Once that mental model of the game world is created, the player must decide, either consciously or unconsciously, whether she feels like she's in that imagined world or in the real one”.
There are two main factors that encourage total immersion, the first is a detailed and thorough world model (sound, images, spaces, types of movement, characters, strong plot etc) and the other is a consistency of how things operate within that model, (do you have to suddenly use an awkward device such as a button to activate that doesn’t seem consistant, heads up displays, tutorial messages, damage numbers appearing over enemies' heads? )
As Madigan points out (2010) “Cognitively demanding environments where players have to focus on what's going on and getting by in the game will tie up mental resources. This is good for immersion, because if brain power is allocated to understanding or navigating the world, it's not free to notice all its problems or shortcomings that would otherwise remind them that they're playing a game”. Above all though, I would suggest it is the strength of the narrative that will suck a player in, just as in a film or a book.
Therefore when designing stages one of the first issues is how to begin the narrative and then how to get the player to learn the rules. The total immersion point should be not too far into the game or the player will not get sucked in, but not too early or the player will not have time to acclimatise to the rules and nature of the game world.

Wirth, W., hartmann, T., Bocking, S., Vorderer, P., Klimmt, C., Holger, S., Saari, T., Laarni, J., Ravaja, N., Gouveia, F., Biocca, F., Sacau, A. Jancke, L., Baumgartner, T., & Jancke, P. (2007) A Process Model for the Formation of Spatial Presence Experiences. Media Psychology, 9, 493-525
N.B. Jamie Madigan, Ph.D. is a psychologist and gamer who explores why players and developers do what they do by studying the overlap between psychology and video games at The Psychology of Games website. He is an excellent writer to look at for anything to do with video gaming and psychology.
Posted by Garry Barker at 07:51