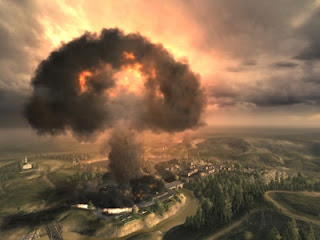 Image from World in Conflict


“I recently learned something quite interesting about video games. Many young people have developed incredible hand, eye, and brain coordination in playing these games. The air force believes these kids will be our outstanding pilots should they fly our jets.”
RONALD REAGAN, speech, Aug. 8, 1983

It’s interesting to reflect on Ronald Regan’s musings from the 1980s. As a former actor turned president he was probably more aware than anybody how reality can be a construction. Realistic war simulators are now the norm in combat training and for a while now the divide between realism and simulation has been blurred.
As Galloway (2006) notes, “The conventional wisdom on realism in gaming is that, because life today is so computer mediated, gamers actually benefit from hours of realistic gameplay. The time spent playing games trains the gamer to be close to the machine, to be quick and responsive, to understand interfaces, to be familiar with simulated worlds.”


David Wong (2007) was worrying about war sims when he wrote this, “I'm starting to think that even World in Conflict, a real time strategy game so "realistic" it takes a NASA-built Quantum supercomputer to run it, has left me woefully unprepared to fight an actual war.” He went on to describe what he would like to see in ‘reality’ war games, including:
“I want a war sim where native townsfolk stand shoulder-to-shoulder on every inch of the map and not a single bomb can be dropped without blowing 200 of them into chunks. Forget about the abandoned building wallpaper in games like the Red Alert series. I want to have to choose between sending marines door-to-door to be killed in the streets or levelling the block from afar, Nuns and all. I want to have to choose between 40 dead troops or 400 dead children, and be damned to hell by chubby pundits from the safety of their studios regardless of which way I go.”

But this type of ‘real’ reality isn’t what people want to see. Most gamers want an escape from reality, but paradoxically want more levels of realism when making that escape. So what’s this about? I posted a blog a while ago that included some thoughts on, the Sublime, the Liminal and Moments of Epiphany. (16th Dec 2010). I was reflecting on why certain images hold our attention in such a powerful way that they seem to take us beyond our everyday experience and provide an entry into higher states of consciousness. One aspect of the sublime I didn’t really unpick was the sublime as “an idea belonging to self-preservation” (Burke, 2009). In On the Sublime and Beautiful Burke goes through lots of different ways in which the sublime can be approached. At one point particular qualities of sound are picked out by Burke, such as the sound of far off cannon fire or a slow ominous beat, as being sublime in their effect. What runs through all his examples is a sense of thrill or excitement that is created by being able to observe something potentially fatal without having to actually experience death or near death. The rumble of far off cannon fire is very different to the experience of actually being fired upon, but there is still a thrill and adrenaline jump when you hear those cannons in the distance. The sublime could perhaps therefore be used as a concept within which to explain the need for an escape from reality, together with the need for higher levels of realism within the games that we use to affect our escape from reality.

Burke’s observations are similar to some descriptions of adrenaline addiction. As Lisa Fritcher (2009) has observed, “Some adrenaline junkies place themselves into dangerous situations. Others prefer to know that they are physically safe, but pit themselves against obstacles that make them feel unsafe”. What we do know is that a thrilling encounter creates a rush of endorphins that is simultaneously energizing and relaxing. However, this "feel good" hormone that was designed to alleviate stress on a short term basis or for emergency situations is something we can become addicted to, and as Hart (1995) suggests, adrenaline addiction can be the unfortunate outcome.

The physiological make-up of human beings lies at the core of how and why we behave. When an animal is confronted with a perceived threat it reacts. The animal will use as many resources as needed and as much energy as possible to deal with the threat. When faced with danger, the two main options are fighting, or getting away. In the face of danger, the body automatically induces high levels of physiological arousal which prepare the organism for emergency responses. (Hayes, 1994). As Atkinson (1996) explains, when the external balance is disrupted, our body changes its internal balance accordingly. These internal changes include; increased heart rate, blood pressure and respiration, which accompanies the pumping of more blood to the muscles, and the associated supplying of extra oxygen to the muscles and the increased work rate of the whole heart-lung system. This is linked to increased sugar rates in the blood, facilitating rapid energy use, and accelerating metabolism for emergency actions. Thickening of the blood then occurs to increase oxygen supply, enabling better defence from infections and to stop bleeding quickly.
What the individual experiences as these things take place is a sharpening of the senses. Your pupils dilate; hearing is sharper, muscle response faster and you think much more quickly with your body/brain. This is because you have increased blood supply to peripheral muscles and the heart, as well as to motor and basic-function regions in the brain but you also have decreased blood supply to your digestive system and irrelevant brain regions (such as speech areas). At the same time as all these events are occurring, endorphins; natural painkillers are secreted. (Atkinson, 1996; Hart, 1995, Hanson, 1986) This physiological explanation of what happens when we encounter a fight or flight situation mirrors what happens when we play a video game. If we let ourselves think there is danger to ourselves ‘self-preservation’ comes to the fore, and this lies at the core of both Burke’s idea of the sublime and the reason our chemicals kick in. Realism in gaming could therefore be read as the creating of more and more effective triggers for this response.

The recent development of procedural animation technologies, have allowed the development of games that rely heavily on the necessary suspension of disbelief to make your body think there is a real threat. The necessary levels of realism can now be facilitated by realistic whole-body muscle physics combined with ‘ragdoll physics’ as an integral part of the immersive gaming experience. Real-time simulation of biomechanics and a related motor control nervous system is now possible because of the developed link between software applications that simulate both evolutionary biology and robot control theories. As different areas of scientific understanding and technology are integrated and software developed that is compatible to 3D form generation and movement software, we will experience higher and higher levels of simulated realism. The lack of differentiation from the real world might of course become a problem, however ghost stories have always induced fear and excitement and the associated release of adrenaline and endorphins and we have never had any historical difficulty in sorting out the real from the imagined, I suspect therefore that we might still be able to sort out which is which. If we can’t differentiate fantasy from reality we will lose one of our essential survival mechanisms, but if we can fake it, we should also be able to spot the fake, as lying and truth detection have always been essential to the human condition.