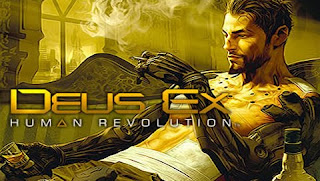 It was interesting to see how many level 4 students wanted to write an essay on title sequences. In the examples we looked at in the seminar we were concentrating on film, however Goldtooth Creative’s title sequence for the game ‘Deus Ex: Human Revolution’ really works well as an opening for the Eidos-Montreal designed video game; a game which revolves around the development of a cybernetic reality, where reality and fiction, the artificial and the real are all merging. The setting of an operating theatre for the film’s title sequence, within which shattered human organs are being replaced by artificial organs is somewhat reminiscent of the scene in X-Men Origins:‘Wolverine’ (2009) where the title character has his skeleton replaced by a fictional super metal; ‘adamantium’. A particularly interesting connection to Deus Ex: Human Revolution is that in both sequences we see fleeting images of a lost past, suggesting that a former life is being erased. Underlying both films are very old story lines that have mythic associations. One theme is the concept of the duality. For example, individual control over a new body versus the altered human as agency of dark controlling forces. This metaphor occurs within many story and plot lines. We are shaped by the Gods who give us life, however once we have life we have a tendency to want to exercise control over it and forget our debts to our creator. In Christopher Booker’s ‘The Seven Basic Plots’ this type of plot centres on what he calls, ‘the rebirth’. Darkness is presented as centred within the hero’s own personality (2010, p. 226) and in order to liberate himself he will need to go through some sort of psychic shift, usually by some sort of quest or adventure in order to come to terms with a deeper, ‘true’ self.
The concept of ‘rebirth’ is echoed in the fact that the operating table is very similar to the birthing table or bed.
The opening credits blend live-action with CGI to introduce an audience to a world at the dawn of a cybernetic renaissance. The operating table provides a platform for the birth of a new life-form that has yet to develop a soul. Lens flare type light streaming into the image from an unseen operating table light source, allows cuts to be made seamlessly, whilst a layering of x-ray images with white text that rotates with the camera becomes a ‘backbone’ grid that stabilises the images as the text moves through. An overall high tonal contrast but restricted colour palette of warm yellows, blacks and browns is tinged with blue, while graphic elements such as circles and heartbeat indicator lines underpin the invisible typographic grid. Vector drawn diagrams float in white over underlying images of bones, suggesting the integration of organic and manufactured materials. The totality produces a dream-like quality that suggests that these are images glimpsed by someone moving in and out of consciousness, flashes of memories and dreams, interspersed with a low level awareness of the operating procedures being enacted. 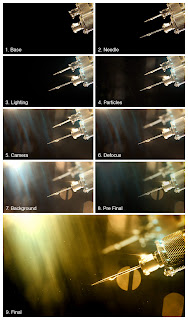 The suffering experienced by the lead character Adam Jensen could, I would argue, be related to another mythic series of stories that surround the North American Indian concept of the shaman. Often the shaman’s transformation into a being that can straddle both the world of the flesh and the world of the spirit is said to be accompanied by physical pain. The stories of shaman are often told as if all of the actions take place in a dream world, half way between reality and another world that exists on the other side of death. This is echoed in other stories and religious myths, the one we are of course most familiar with is the crucifixion of Jesus Christ. After enduring his time of suffering on the cross, he will eventually rise and assume his true position as a God. Jesus again reminds us of the dualism that lies behind many religious stories. In his case the duality is centred on whether or not he is a man or God. In all of these cases the individual is elevated into a new consciousness because of their traumatic experiences. There are also several myths that focus on what is called ‘the dismembered God’ thesis. In prehistoric times leaders of tribes themselves played the part of a god and were at certain points in the year slain and dismembered then ‘planted’ to ensure that next year’s crops would grow. Again some form of death is necessary for a rebirth. The opening credits therefore operate as a type of mythic doorway into the game and set up the conditions for the first level of immersion. (See post on immersion Wednesday, 14 December 2011)

The background to the development of the images used is interesting too. A trace memory of James Whale’s original ‘Frankenstein’ images still runs through this title sequence as well as ghosts of Rembrandt’s ‘Anatomy Lesson of Doctor Tulp’. 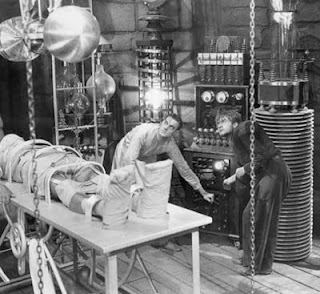 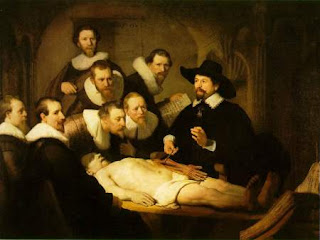 In order to start your own research into all this a good start would be an interview on the Blog http://www.artofthetitle.com/ with the film credit director Paul Furminger of Goldtooth Creative and ‘Human Revolutions’ game director Jean-François Dugas of Eidos-Montreal. They talk about concept development and how they combined the digital and live-action footage. A clip of the opening sequence is available at http://www.youtube.com/watch?v=XIqJaT3cvf8