Developing emotional attachment in a video game or film 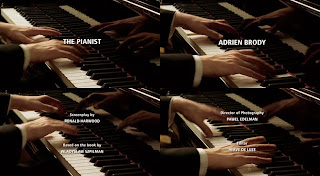 
The ability to empathize with the characters portrayed in a narrative is vital to both film and game. The actions of a character are designed to enable an audience to develop empathy with a particular emotional experience in the expectation that this will allow the audience to understand why the characters feel the way they do. However in a game both the player and the developer have control over a character’s actions. In fact the association between a player and a particular character can become extremely intense. I can clearly remember my sister an obsessive MUD player, being totally obsessed with her character. She used her involvement in the game’s fantasy world to "shut off" her own life so that she could become part of another reality. The writer Sherry Turkle (1997) wrote extensively about this and in particular how participants might create more than one personality which would allow them to act out several types of roles. The interesting issue here is that these ‘personalities’ are partly a construct of the game designer and partly the player. The character is not a ‘tabula rasa’ or blank slate, it is designed to fit into a particular world and respond to the rules and principles laid out for it. (See previous post: 14 December 2011: “Therefore when designing stages one of the first issues is how to begin the narrative and then how to get the player to learn the rules.”) So what are the ways a designer can set out conditions for character development and how does a player develop these further?
The designer will usually start with a decision as to the type of world the game will exist within, (science fiction, war, fantasy, historical, etc. etc.) this world will already have associations with pre-existing stereotypes which the player will subconsciously take into the situation. (If a combatant in a war game, the player will expect to behave in certain ways probably using clichés developed by going to war movies/reading books or comics etc). The formal design of the game may be emotionally suggestive, (dark colour palette, high contrast, a section where everything goes purple, sharp angles to all the forms experienced, soft out of focus feel, lots of shadow, intense colour saturation etc etc) and background sound may be used to either sooth out tensions or build anxiety. However it is through the game-play that most emotional intensity will be experienced by the player. As each challenge is overcome or not as the case may be, the way this is achieved will add to the player’s understanding of their character. This understanding will then be laid upon a growing awareness of the ‘narrative’ of the game and its particular goal. Thus narrative consequence will have a direct influence on emotional engagement, in particular when the player’s character is involved with other characters within the game world, the player will be unconsciously comparing and contrasting his/her own player’s characteristics with others.
Emotional intensity is often associated with player accomplishment. The balance between player skill and game difficulty is central to this. “If the game is too easy the player quits because they are bored. If the game is too hard players quit because they are too frustrated.” Lazzaro (2008) The diagram below designed by Lazzaro sets out some of the issues. 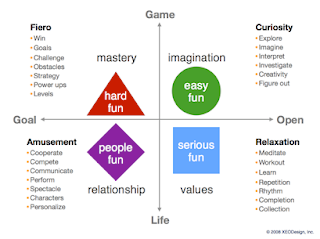 N. B. Fiero is ‘the Italian word for “Personal triumph over adversity.” It is the emotion that accompanies the experience of mastery.


In film emotional intensity is partly developed by the building of empathy with particular characters and partly by creating a general emotional atmosphere as a formal quality. This can be through the use of sound (I will be putting up a post on this at some point), editing style, cinematography, actor’s ability to give depth and weight to a character, and of course directorial ability as co-ordinator of all these elements. What is sometimes being aimed for is ‘emotional catharsis’ Once again this is a very old term. Aristotle pointed out that in a play or drama what was important was the controlled release of pent-up emotion. He also outlined the fact that this was both on the part of the audience and the characters in a play. This has also been called, ‘emotional cleansing’ as a result of experiencing strong feelings. Through these emotional experiences the inner turmoil built up in an audience can be released.
For instance, in the Roman Polanski film ‘The Pianist’ (2002): the ending is a wonderful catharsis. The body of the film deals with death, persecution and destruction but at the end redemption occurs. Over the end titles, the central protagonist plays Chopin’s ‘Grande Polonaise for piano & orchestra’ with the Warsaw Philharmonic in a concert hall, a close-up on the sensitive concert pianist’s fingers setting the scene for a cathartic balance between emotional release and spiritual yearning. In order to achieve this there are no opening credits or titles, all the text, including the title, appear at the end of the film, thus allowing Polanski to direct the audience to focus on the cathartic moment. Again we experience ‘personal triumph over adversity’.

What is a MUD? Originally this term came from Multi-User Dungeon, (As in Dungeons and Dragons) with later variants Multi-User Dimension and Multi-User Domain. A MUD is a multiplayer real-time virtual world, usually text-based. MUDs combine elements of role-playing games, hack and slash, player versus player, interactive fiction, and online chat.

If you wanted to explore these issues further the texts below would be a useful start.
Bellantoni, P. (2005) If It's Purple, Someone's Gonna Die: The Power of Colour in Visual Storytelling New York: Focal Press
Freeman, D. E. (2003) Creating Emotion in Games: The Craft and Art of Emotioneering London: New Riders Games
Lazzaro, N (2008) Why We Play Games. Baltimore: Robert Wood Johnson Foundation
Lazzaro, N (2008) Halo Vs. Facebook: Emotion and the Fun of Games. Etech Conference. http://en.oreilly.com/et2008/public/schedule/detail/1589
Lazzaro, N (2007) The 4 most Important Emotions of Game Design Available at: http://www.2007.loginconference.com/session.php?id=46
Turkle, S (1997) Life on the Screen: Identity in the Age of the Internet London: Simon & Schuster
Posted by Garry Barker at 08:43